Last night, again, I sat with a Christian friend who is struggling very deeply with his faith.  In fact, what is more clear to me than it probably is to him is that he lives with a kind of anguish, a internal and unspoken resignation to believing he will never fully being a full member of the Body of Christ, but only, at best, as an exception God might endure if he tries hard enough.  While this kind of conversation is particularly heartbreaking to me, it is anything but new.  In fact, I have distinct memories of late night dorm room conversations more than 20 years ago around this very topic. So why are there so many loving, faithful people struggling to believe that God could possibly love them without putting an asterisk by their names in the Book of Life?

I am afraid there is no short answer.  Certainly the vitriol and disgust that has been expressed to me individually and to entire groups of people in the media over the last few days plays some part, but rather than try to provide some social analysis and recommendation to the Church on how to be less crappy neighbors in communicating grace,  I think it is a good time to turn my attention to those of you who, like I have in life, ever felt myself to be an exception to the love of God.  This is in every way, my own story, and not just a story I want you to know about, it is one in which I would like you to join me.

This last Sunday we read about two characters who, in very different ways, were desperate for the mercy of Jesus.  Mark, in his Gospel splices these two stories together, he interweaves them so that we might see them both happen together and learn from how they are actually just one story. (5:21-43)

Jesus is out doing his thing and super-duper crowded by people wanting to get in on the action.  The disciples surely had to look more like hired secret service (without the creepy ear buds and sunglasses) than actual friends and followers of Jesus.  Then along comes the esteemed and highly respected church board president, Mr. John. J Jairus, for whom the crowd parts to open a path between him and Jesus.  Mr Jairus (kinda surprisingly) throws himself at the feet of Jesus begging for healing for his 12 year old daughter who is about to die (pay attention to the numbers).  So Jesus consents and off they go with the crowd all raucously pushing along behind them.

Here is where Mark likes to be funny.  There they all are, the president of the Church board leading the way with Jesus in tow and the disciples acting like Beyoncé’s entourage when Jesus stops in his tracks and says, “Who touched me?”

The disciples surely threw a sideways glance at each other before repeating the question, “Who touched you?…um… about half of Galilee, Capernaum, and the whole region of the Garasenes… or did you not notice the hundreds of dusty hands all trying to paw at you?  Who touched you? Eesh.  It is easier to count who didn’t”  But the woman who had reached out for him knew.   She knew exactly who Jesus was talking about, and she was terrified.  Neverthele

ss, she did not run in fear but threw herself before him (not unlike Jairus) and told him the whole truth: how she was bleeding and declared unclean for , ahem, 12 years, and how she had been exploited by all the HMOs and doctors and how she knew if she could just touch the hem of his robe…  She was full of fear, terrified most importantly disqualified from the love of God.

She moved in any way.

Jesus stands the facing the crowd, frustrating the disciples who want to keep on the move and turning his back to Jairus. Oh right, Jairus is still on stage.   Just then one of Jairus’ servants shows up and delivers his lines at the same time Jesus does.

Daughter, your faith has made you well; go in peace, and be healed of your disease / Your daughter is dead. Why trouble the Teacher any further?

Daughter?  Jesus called a woman with a uterus that had been hemorrhaging for more than 12 years his daughter?   She had to be at least Jesus’ age if not quite older.   And how painful to have him say that as Jairus receives the news his daughter is dead.  Jesus ignores the bad news all together. ‘Do not fear, only believe.” 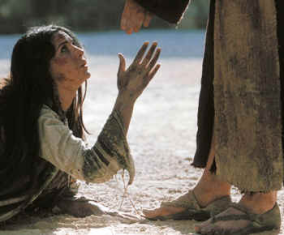 Didn’t Jairus already believe or why would such a proud man have kneeled in front of Jesus? Or did he perhaps think that his office gave him special access to the healer?    What does Jesus mean by “belief.” Whatever it was, Jairus apparently still needed to learn something more of faith and the person he needed to learn it from was the woman who was seemingly exempted from being a participant in the kingdom of God.   She was a woman, she was poor, she was unclean, and she was terrified… but she reached out for his robe anyway… actually she crawled he way through a crowd of people ostensibly making them unclean too so that she could just reach out to him.

For so much of my life I see myself as something unclean or defective.  As devout and holy as I wanted to be and tried to act like, I was deeply convicted that I had been born incapable of receiving the love of God.   Exempt.  Afraid.  Terrified that if I tried to follow Jesus I Would make other’s unclean as well.

…Until I touched just the hem of his robe.

My faith, if anything, was nothing more than the desperation to ask God to love me even if I didn’t stand a chance. If anything my faith was a faint conviction that, at least theoretically, God’s love was bigger than all my fears and false attempts at piety. My faith was just asking, reaching out. My faith was desperation. The thing that healed me however, and is healing me still, is the loving grace of the One who refuses to put an asterisk by my name, but instead, turns for just a moment away from the needs of pious, beautiful and worthy, and instead favors me long enough to let the love get through. Once you have been touched by that kind of love, noting else matters… except following suit and loving others who feel like they have an asterisk by their name as well.

The other night someone asked me quite sincerely if God loves everyone the same.  I said, no, just like a mother always loves the child of hers who is hurting the most in that moment.  Such is the witness of the Jesus and the two daughters.

The desperate woman of faith didn’t just get healed, her dignity was acknowledged and she was lifted up instead of belittled.  This didn’t mean there was not enough grace for Jairus.  In fact, there is more than he came for.   He came to seek his daughter’s healing, he left being healed as well.   In the economics of grace, there is always excess and we leave with more than we realized we needed.

I am more convinced than ever that the real enemy of faith is fear, not doubt. Doubt is only the awareness of what parts of us still need to be persuaded.   Doubt is a place where we exercise our spiritual disciplines of thoughts, questions, prayers, service and compassion. Doubt is a gift that moves us forward to love God with all of our hearts, minds, and strength. Doubt is the night in which we carry our lamps and keep moving.   Fear, on the other hand,  is what triggers us to fight or to flee, neither of which are great responses to grace.

In fear, we either return to resentment judgment and anger when we become afraid of where we stand with God or what is happening in the world around us or perhaps we just opt out all together, leaving faith all together or just becoming paralyzed, spiritual couch potatoes. Either way, whether we are the separate one’s crawling along the ground to reach out in a hope of healing, or whether we we fearfully judge others in hopes of convincing ourselves of our worthiness, there is a path to love for us all.

So what is it that exempts you from the love of God in this moment.  Are you

gay?  Did you kill someone in a foreign country in the name of America?  Do you just feel, unhappy, off or defective?  Have you lost hope.  Do you have more faith in your choice of chemicals than in the love of God.  Are you angry, are you ill?  Or are you even the one who cannot help yourself but to look down on others?

OK.   You aren’t the first to feel like that.   You will not be the last. Just keep leaning in to the love.  There is healing there for us all.

I can tell you that I love you or I wouldn’t be here typing this.   I can tell you I know, now, that I am loved and it has indeed healed me and made all the difference…. and it is still working on me.    But most of all I can pass on the words that Jesus said to Jairus.

“Do not fear, only believe.”

Album Review: We Sing Together by Rigel Thurston

It’s Not About the Chocolate:self improvement in Lent. UPDATE

Thanks for the boost!